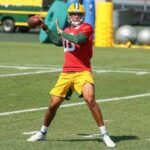 Until Aaron Rodgers says more about his future in Green Bay than the few innocuous words he uttered immediately following the NFC championship game, the local media needs to stop trying so hard to create drama. The 37-year-old quarterback agreed to a $134 million extension less than three years ago that takes him through his age-40 season. If that makes him a “lame duck,” sign me up for quacking lessons. Anyway, here are some more Packers-related thoughts that went through my head in the past few days:

1) If general manager Brian Gutekunst eventually decides to commit long-term to Rodgers, he could find a decent market for Jordan Love a year from now. That’s because the quarterbacks eligible for the 2022 draft look pretty underwhelming. Aside from North Carolina’s Sam Howell, there isn’t another consensus top-10 pick. And while that will likely change between now and next April, the talent and the depth at the position doesn’t appear to be as strong as it’s been in recent years. If Love has a good preseason, it’s very possible a team would be willing to trade a top-40 pick for an athletic and strong-armed QB who looked every bit as impressive as a sophomore in 2018 as BYU’s Zach Wilson – expected to go as high as No. 2 overall to the Jets later this month – looked last season.

On this play from a game against heavily-favored Michigan State in 2018, Love (#10) spins away from trouble, and while running to his left, delivers a dart to a receiver 37 yards down the field. There’s little doubt Love would’ve been a top-10 pick had he come out after his superb sophomore season.

2) The re-signing of Tyler Lancaster went largely unnoticed on Tuesday, but it was probably Gutekunst’s smartest move since the start of free agency. While the former Northwestern star wasn’t worth the right of refusal tender ($2.12 million), he’s a bargain at around half that number. The natural nose tackle played almost 400 snaps last season – the majority out of position at defensive end – and more often than not held his own versus the run. He gives 100 percent on every snap and moves surprisingly well for a big man (6-5, 315). He flashes short-area burst closing on the ball, although he lacks the explosiveness to offer much as a pass rusher. The return of Lancaster, along with Kenny Clark, Dean Lowry, and Kingsley Keke, gives the Packers four capable D-linemen heading into the draft.

3) It’s official, there will be a 17th game next season. That means the Packers will face the AFC champion Chiefs in Kansas City. Out of 11 non-NFC North opponents, Green Bay will face a league-high eight playoff teams. That doesn’t include the San Francisco 49ers, who were in the Super Bowl just 14 months ago. While it’s always risky to judge a schedule in April, it’s difficult to imagine this one not being very challenging. If the Packers are to have any chance of earning a bye for the third consecutive year, Matt LaFleur is going to have to continue his mastery of the Bears, Lions, and Vikings. He’s an eye-popping 11-1 against those teams since being named head coach in January 2019.