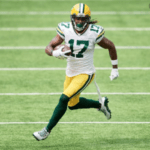 1) Adams will turn 30 toward the end of the first year of his next contract. Of the top 20 wide receivers in terms of yards last season, not one was over the age of 28. This doesn’t mean that Adams won’t be good for the duration of his extension, but it means he probably won’t be great for the duration of his extension. The Packers have had a lot of outstanding wide receivers in recent years. The list includes Greg Jennings, James Jones, Jordy Nelson, and Randall Cobb. Those four players averaged 940 yards and 8 touchdowns in the two seasons before turning 30; they averaged 755 yards and 6 touchdowns in the two seasons after turning 30. Professional football is a young man’s game, and the Packers don’t want to be paying for a brand new Rolls Royce in 2023 and getting a 2018 model.

3) The Packers can’t keep handing out huge extensions. Since August 2018, Gutekunst has made quarterback Aaron Rodgers, nose tackle Kenny Clark, and tackle David Bakhtiari the highest-paid players at their positions, and he’ll likely do the same with corner Jaire Alexander and perhaps edge rusher Za’Darius Smith in the near future. It’s hard to criticize these moves since any coach or general manager will tell you that those are the most important positions on a team – not to mention the most difficult to acquire. Wide receiver is a different story. Every draft is inundated with big, fast players who can catch the football. Last season, a quarter of the top 20 receivers in terms of yards were players with less than three years of NFL experience. If Gutekunst chooses the right player in a couple of weeks, the Packers should have an adequate replacement for Adams ready to go in 2022.

4) The Packers are 6-0 without Adams the past two seasons, and the offense averaged 33 points in those half dozen games.  Yes, the competition wasn’t great, and yes, playing short stretches without a star isn’t the same as playing an entire season, but 6-0 is still 6-0. Without the team’s No. 1 wide receiver, coach Matt LaFleur and his staff  adjusted by using the running backs a lot more in the passing game. Aaron Jones and Jamaal Williams, who averaged a combined 4.3 catches and 30 yards with Adams in 2019 and 2020, averaged 8.2 catches and 85 yards without him.

Do I think the Packers will extend Adams? Yes. It’s the obvious move. Plus, aside from Bryan Bulaga and Corey Linsley, Gutekunst has re-signed every quality starter since taking over as GM. The only thing that would make me even consider the possibility of Adams not being back in 2022 would be if the Packers spend a high pick on a wide receiver in the upcoming draft. Even then, I’d still be very surprised if No. 17 isn’t locked up for another four or five years by the end of the summer. It feels inevitable. But whether that would be the right move is far less certain.

(This story was originally posted in April)

4 thoughts on “Should Packers Extend Adams?”