Summer Of Love Set To Begin 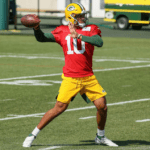 Earlier this week, coach Matt LaFleur made official what most people suspected for months – MVP Aaron Rodgers won’t play in any preseason games this summer, and Jordan Love will see the majority of snaps at quarterback. OK, let the overreactions begin!

Whatever Love does in the next three games will be dissected by fans and the media the way a kid in high school dissects a frog, and every piece of tape will be analyzed like it’s the Zapruder film. If the 22-year-old from Utah State completes 70% of his passes for 500 yards with twice as many TDs as INTs, he’ll be the next Brett Favre. If he completes less than 50% of his passes for 250 yards and throws a few more INTs than TDs, he’ll be the next Brian Brohm. In reality, whatever happens this month won’t determine one way or another what the future holds for Love.

Of course, it would be nice to see Love play well. Confidence is a big deal for a young player, especially a QB. But it’s important to remember how underwhelming Rodgers looked in his first couple of preseasons. He completed 56% of his passes with 4 TDs and 3 INTs, and his first summer was particularly ugly (51%, 1 TD, 2 INTs). It’s also important to remember that most scouts considered Rodgers to be a better and more advanced prospect than Love.

In a preseason game from 2005, here’s a very young Rodgers doing what an older Rodgers would almost never do – floating a ball into heavy traffic.

Conversely, Tim Boyle resembled Joe Montana in 2018 and 2019. The undrafted rookie completed 57% of his passes with 9 TDs and 2 INTs in his two preseasons with the Packers. And remember Joe Callahan? The former Division III player completed 61% of his passes for 499 yards with 3 TDs and 0 INTs in the summer of 2016. Boyle is currently in a tight battle with David Blough to be Jared Goff’s understudy in Detroit, and Callahan is out of the league.

That said, I’ve been around long enough to know that most people won’t be so pragmatic. Love will either be hailed as the next great Packers QB or dismissed as a bust who didn’t help in 2020 and alienated Rodgers in the process. I’ve also been around long enough to know that neither of those depictions would be accurate. The key for Love is to gain game experience and learn from his mistakes. That’s what the next three weeks are really all about.

But if we’re being honest, for the collective psyche of everybody involved, a few TDs later tonight would sure be nice. 😉

3 thoughts on “Summer Of Love Set To Begin”