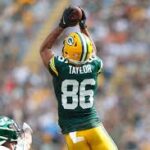 After rewatching Saturday’s game vs. the New York Jets, here are 10 things worth knowing:

1) Aside from one drop vs. the Jets, wide receiver Malik Taylor has been really good this preseason. The former undrafted free agent from Ferris State is playing faster and more confidently in his third camp. Juwann Winfree was the flavor of the month in June, but making plays and being available is what matters in August.

2) Royce Newman was far from perfect, but he did nothing to suggest his recent move up the depth chart was unwarranted. The fourth-round draft pick from Mississippi needs to get a lot stronger to reach his full potential, but right now, he’s probably been the most impressive of the four players competing to start at the two guard spots.

3) Left tackle Yosh Nijman wasn’t facing any elite pass rushers on Saturday, but that shouldn’t be held against him. His technique is noticeably improved this summer. If GM Brian Gutekunst considered the former undrafted free agent to be worthy of a spot on the 53-man roster last year, it’s hard to imagine him feeling any differently now.

4) Saturday capped a brutal seven-day stretch for Lucas Patrick. The five-year veteran played poorly vs. Houston last Saturday. He then lost, at least temporarily, his starting job at right guard on Monday. And his week from hell ended yesterday with two penalties as the backup center. His experience should keep him safe, but you never know.

5) Tight end Bronson Kaufusi did some nice things in the run game. The 30-year-old converted defensive lineman from BYU was one of the reasons the ground game came to life after sputtering against Houston. He used his size (6-6, 270) to move bigger defenders, and he didn’t look uncomfortable in space. His pass blocking wasn’t nearly as impressive.

1) Jack Heflin isn’t flashy, but he’s probably been the team’s most impressive defensive rookie this preseason. The undrafted free agent from Iowa was very solid at the point of attack versus the Jets, and he even provided some unexpected pressure as a pass rusher. At this point, I’m not sure how you can keep this guy off the final 53-man roster.

2) Nose tackle T.J. Slaton used his massive size and surprising burst to abuse a backup center and record a sack, but his overall performance was mediocre. He was effective when he kept his pads low and didn’t drop his head and lose track of the ball. The rookie has undeniable talent, but expecting much from him this season might be unrealistic.

3) Kabion Ento tackled more like the wide receiver he was in college than the cornerback he is in the NFL.  The third-year player from Colorado possesses some intriguing cover skills, but unless you’re Deion Sanders, you better be able to get a receiver to the ground. Ento struggled to break down in the open field and come to balance.

4) Corner Isaac Yiadom played on Saturday the way he played the past three seasons for Denver and the Giants. The former Boston College star was physical vs. the run and on special teams and inconsistent in pass coverage. In short, he looked like a guy that two teams wanted to dump and that two teams were willing to dig out of the trash.

5) Strong safety Christian Uphoff didn’t do anything in his limited snaps on defense to boost his chances of making the final roster, but he was once again extremely impressive covering kicks and punts. The undrafted rookie from Illinois State has the size, athleticism, and fearlessness to provide a much-needed spark on special teams.