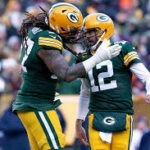 We all found out last January just how important one player can be to the fortunes of a football team. The season-ending injury to All-Pro left tackle David Bakhtiari also ended any chance the offensive line had to adequately protect quarterback Aaron Rodgers against Tampa Bay’s ferocious pass rush in the NFC championship game. With that in mind, here’s my annual list of the 10 most irreplaceable Packers heading into the 2021 season:

The veteran offensive lineman has been an average to slightly above average player in his two seasons with the Packers, but his versatility gets him on this list. Turner will start at right tackle in two weeks against the Saints, but he can fill in at any position on the offensive line except for center. A year ago, the 29-year-old started six games at right tackle, four at right guard, and six at left tackle, including the NFC championship. Pro Bowler Elgton Jenkins, who’ll show up much later on this list, tends to make such versatility look routine. It’s definitely not.

Jones would rank a lot higher on a list of the best players, but the depth at running back pushes him to No. 9 on this particular list. Backup A.J. Dillon has the potential to be a star, and No. 3 Kylin Hill was the most impressive rookie in training camp. Still, Jones is a unique talent whose versatility is hard to replace. He’s capable of turning nothing into something as a runner, and he catches the ball like a wide receiver down the field. Simply put, there was a reason why GM Brian Gutekunst gave Jones an extension a few months ago that included almost $20M in guarantees.

The third-year safety isn’t one of the 10 best players on the team going into the season, but his versatility and the lack of depth at the position make him one of the 10 most irreplaceable. Savage has the speed to make plays all over the field – whether lined up deep, in the box, or even in the slot. The defense wasn’t the same without him in 2020, and the dropoff could be even greater now that veteran Will Redmond is on injured reserve. Should Savage leave the field, his replacement would be either an unproven undrafted free agent or an unproven seventh-round pick.

The veteran nose tackle would be even higher on this list if his play was more consistent. While there are times when Clark is almost unblockable in the middle of the defensive line, too often, he’s just another good player. But even when he’s not dominating, he’s still one of the most irreplaceable members of the team. That’s because the dropoff from Clark to the next best player at the position is one of the biggest on the roster. If he should miss or leave a game this season, either journeyman Tyler Lancaster or rookie fifth-round pick T.J. Slaton would be asked to fill in.

An argument could be made that Adams is the best player on the team, but how can he be higher than No. 6 on this list when the Packers went 6-0 and averaged over 30 points without him in the past couple of seasons? That certainly doesn’t diminish the greatness of the first-team All-Pro wide receiver, but it does say something about the importance of the position. For example, it’s just a lot easier for an offensive coordinator to compensate for not having his No. 1 wide receiver than it is for a defensive coordinator to compensate for not having his No. 1 cornerback.

The Packers are extremely fortunate to have a couple of players capable of stepping in at left tackle, but there’s a reason why Bakhtiari is a 5-time All-Pro and the second-highest-paid left tackle in the league. Nobody is better at protecting a quarterback’s blind side, and that’s even more important when the quarterback in question is almost 38 and nowhere near as mobile as he was even two or three years ago. And while the offense should be fine until Bakhtiari returns from PUP, there’s no way it’ll function at peak efficiency until No. 69 is back at his familiar position.

New defensive coordinator Joe Barry is praying he won’t have to find out right away just how irreplaceable Smith is, but it’s a possibility since the veteran outside linebacker has been out all summer with a back injury. Not only does the second-team All-Pro produce sacks on a consistent basis – 26 in 32 games since signing with Green Bay two years ago – but he makes everybody around him better by drawing so much attention from offenses. Slowing down the New Orleans Saints in 15 days will be tough enough with Smith; it’ll become a herculean task if he’s not on the field.

The 25-year-old Pro Bowler isn’t the third-best player on the Packers, but his talent and versatility make him the third-most irreplaceable. Jenkins can play all five positions on the offensive line, and more importantly, he can play them all at a high level. He’ll begin the season at left tackle while Bakhtiari recovers and then move to left guard once he returns. While other offensive linemen might be as versatile as Jenkins, none are as good at being versatile.

The Packers have four other No. 1 picks on defense, and yet that side of the ball would likely collapse without Alexander. That’s how good the second-team All-Pro played last season. He’s a true shutdown corner at a time when true shutdown corners are few and far between in the NFL. Not only can the 24-year-old from Louisville take an opponent’s best wide receiver out of the game, but he also does a solid job in run support. And while the drafting of Eric Stokes should improve the depth at corner this season, in no way does it make Alexander any less irreplaceable.

Matt LaFleur hasn’t had to play without Rodgers for a single snap since taking over as head coach in 2019. If a quarterback isn’t at the top of any team’s list of most irreplaceable players, then you know that team doesn’t have an elite player at the position. But some elite quarterbacks are simply more important than others, and with only unproven Jordan Love behind him on the depth chart, no quarterback in the entire league is more important than Rodgers.

5 thoughts on “10 Most Irreplaceable Packers”