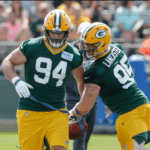 Since taking over as GM in 2018, Brian Gutekunst used premium draft picks on three corners, one inside linebacker, one outside linebacker, and one safety and spent nearly $200M on defensive free agents. But after watching a lot of football the past few weeks, I came to a realization – the Packers just aren’t as talented as many teams on that side of the ball.

While the Packers have one great player (Jaire Alexander), a couple of really good players (Za’Darius Smith and Kenny Clark), and a trio of promising players (Rashan Gary, Darnell Savage, and Eric Stokes), they also have too many players who probably wouldn’t start for at least half the teams in the league (Kingsley Keke, Dean Lowry, Krys Barnes, De’Vondre Campbell, Kevin King, and Chandon Sullivan). And that’s not even taking into account first-year coordinator Joe Barry, who may run Vic Fangio’s highly regarded and widely appropriated scheme, but whose closest similarity to one of the league’s most respected defensive minds is the number of letters in his first name.

As I watched Philadelphia and San Francisco slug it out last Sunday, I saw two dominant and athletic defensive lines blowing up running plays with penetration and disrupting the passing game with consistent pressure. How good is the Eagles’ defensive line? I’m not sure Clark would be a starter. And while Philly’s linebackers are nothing special, they don’t have to be behind that front four. As for the 49ers, they have former Pro Bowler Dee Ford and the talented Kentavius Street coming off the bench. Put studs like Fred Warner and Dre Greenlaw behind that line, and it’s no wonder San Francisco can play good defense regardless of how many of their cornerbacks are on IR.

And it’s not just those two teams. Buffalo, Pittsburgh, Baltimore, Denver, the Rams, Tampa Bay, and Carolina all looked considerably more talented than the Packers, and you could make a strong case for New England, Miami, Cleveland, Indianapolis, the Chargers, Arizona, Chicago, and New Orleans. That’s simply inexcusable when you consider all the capital the Packers have spent to upgrade the defense since 2014, but it’s not a shock when you think of names like Khyri Thornton, Damarious Randall, Quinten Rollins, Montravius Adams, Josh Jackson, and Oren Burks.

Under their last two general managers, the Packers have missed on far too many high picks in recent years. And Gutekunst hasn’t helped his cause by all but ignoring the defensive line and inside linebacker. Burks, who hasn’t started a game in nearly three years, and Adams, who left in free agency last March after posting 22 solo tackles and 1.5 sacks in four seasons, are the only players at those two positions drafted prior to the fifth round since 2017.

Along with a lack of talent, the Packers are also a lot slower on the defensive line and at linebacker than most teams. Clark, Gary, and Campbell run well, but everybody else is more of a plodder than a thoroughbred. The lack of speed is painfully obvious every time a marginally athletic QB like Jared Goff scrambles up the middle for 20 yards.

So what can the Packers do to improve things in what sure looks to be an “all-in” season? They can begin by giving defensive end Jack Heflin a chance to play. The undrafted rookie showed enough in August to be active on game day. But the best way to improve is to trade for an established veteran. And I don’t mean one of those deals where Gutekunst acquires a player another team doesn’t want for a player he doesn’t want. I’m talking about trading a significant draft pick for a legit starter. The Packers haven’t made such a move since George W. Bush was in the White House, but now is the time to be bold, especially with multiple high picks likely arriving in 2022 courtesy of Aaron Rodgers.

None of this is to suggest the Packers can’t be a decent defense as is, although that probably got harder after the inexplicable hiring of Barry in February. Any defense with stars at each level has the potential to at least be above average. But for this group to be good enough to slow down a quality offense in the playoffs, Smith needs to get healthy, and Gary, Savage, and Stokes have to be a lot better in January than they are now. That’s a lot to ask for this season. What’s not a lot to ask for is the GM to use some high picks on an end and an inside linebacker next spring.