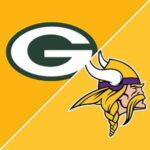 1) Yosh Nijman began training camp simply battling for a spot on the roster; four months later, he could be starting at left tackle in the playoffs. That’s because Elgton Jenkins tore his ACL on Sunday, and David Bakhtiari is still recovering from the same injury. Is the 26-year-old former undrafted free agent up to the task? We’ll find out soon enough, but he certainly got the job done against the Vikings. His seven snaps late in the game were flawless. And while it was only seven snaps, he moved his feet well and stymied edge rusher Everson Griffen.

One of the keys to the game-tying touchdown late in the fourth quarter was Nijman (#73) being able to keep Griffin away from the quarterback.

2) The loss of Jenkins is so crushing because it not only removes another star from the lineup, but it also forces either Lucas Patrick or Royce Newman to start for the remainder of the season – even if Bakhtiari and rookie Josh Myers return. Neither player got much push on Sunday, and that’s why A.J. Dillon gained only 11 of his 53 yards running to the right side. On a positive note, Newman had his second consecutive game without a major breakdown in pass protection after an awful performance against the Chiefs in which he allowed six pressures and a sack.

3) Marquez Valdes-Scantling was targeted a season-high seven times, and not coincidentally, he enjoyed his most productive day in over a year. The speedy wide receiver caught four passes for 123 yards, including a long TD that tied the game with just over two minutes remaining. The former South Florida star is running crisper routes and catching the ball more naturally in his fourth season. He’s beginning to look like a legit starter. Valdes-Scantling lined up a dozen times in the slot as the coaches made a concerted effort to get him more involved. It definitely worked.

4) Second-year tight end Josiah Deguara caught the first touchdown of his career in what was easily his best game of the season. His other reception was good for a first down. Even more encouraging was his run blocking. At 6-foot-3 and 245 pounds, the former Cincinnati star will never be Marcedes Lewis, but he managed to wall off linebackers and seal second-level defenders on a number of plays. With Robert Tonyan on injured reserve and out until 2022, Degaura will be counted on to help fill the sizeable void. Sunday was a small step in the right direction.

1) The return of Kingsley Keke after sitting out a couple of games with a concussion was a welcome addition to a defense missing three of its top four edge rushers. The third-year player from Texas A&M looked extremely fresh as he used his quickness to get around Minnesota’s interior offensive linemen all day long. Keke also held up well against the run. The only blemish on his performance was the roughing penalty that negated an interception by Darnell Savage. The Vikings scored a TD three plays later. And while the flag was warranted, the hit was hardly egregious.

2) I mentioned throughout the preseason how undersized outside linebacker Tipa Galeai was more impressive stopping the run than he was rushing the passer, and that proved to be the case on Sunday. In his first action of the season, the former Utah State star was a big reason why the undermanned defense held Dalvin Cook to 86 yards. The 230-pound Galeai was able to set the edge against much larger players, and his speed enabled him to make a few plays in pursuit. His 20 rushes were less successful, although he did get around Brian O’Neill a couple of times.

3) The solid work of Tyler Lancaster was another reason why Cook averaged less than four yards a carry. The former Northwestern star, who played more than usual as the coaches eased Keke back into the lineup, was as solid as a rock at defensive end. Lancaster has been a bit up and down in his fourth season, but there was nothing inconsistent about his play on Sunday. He was even credited with a pressure as a pass rusher – his first since late September.

Lancaster (#95) shows off his upper-body strength by fighting through a block by tight end Tyler Conklin and halting Cook’s progress with one arm.

4) It was bound to happen; Eric Stokes played like a rookie on Sunday. After a string of solid outings, the former Georgia star was absolutely abused by Justin Jefferson, one of the league’s young superstars. Stokes allowed five receptions for 102 yards, including a touchdown in the fourth quarter. He was continually late to transition out of breaks and showed a lack of awareness with his back to the ball. These were also problems on his college tape. To be fair, nobody expected Stokes to be covering the opponent’s No. 1 receiver less than three months into his NFL career.

5) Krys Barnes had another physical and productive day versus the run, but quarterback Kirk Cousins deftly took advantage of his lack of speed in coverage. This weakness gets accentuated on a fast track. Because defensive coordinator Joe Barry used fellow inside linebacker De’Vondre Campbell more as a blitzer this week, Barnes had a bigger role than usual in the passing game. His 22 snaps in coverage were a season-high. That number should go down once Rashan Gary returns from injury, and Barry can go back to relying on his front four to manufacture pressure.

1) Mason Crosby has now missed eight of his last 14 field goals, including a 32-yarder on Sunday. While neither the snap from Steven Wirtel nor the hold from Corey Bojorquez was perfect, they were both good enough. At this point, it’s pretty obvious the 37-year-old Crosby is thinking about too many things before the kick. There aren’t many good alternatives on the street, but the Packers will have to at least consider making a change if things don’t get better in the next two or three games. They can’t go into the playoffs with such an unreliable kicker.

FINAL THOUGHTS: Losing Jenkins is far more troubling than losing the game. Despite playing without seven starters and making all kinds of mistakes, the Packers had plenty of chances to win. And let’s be perfectly honest, beating the talented Vikings on the road is no easy task even under the best of circumstances. The key now is to get to the bye week – hopefully at 9-3 – and then start adding key players to the lineup rather than subtracting them.