Time To Play AJs Together

With tight end Robert Tonyan out for the season and wide receiver Randall Cobb now out for at least the next three or four games, Aaron Jones and AJ Dillon are two of the top three weapons left on a Packers’ offense that’s scoring eight fewer points a game than it did a year ago. Continuing to play the talented running backs together for less than five percent of the snaps makes no sense.

With the weather turning colder, it’s time for the 245-pound Dillon to double the 10 carries a game he’s been averaging when Jones is healthy. That’s way too few opportunities for the best running back in the league when it comes to “success rate” (I have no idea what that means, but I’m guessing it’s a good thing). Increasing Dillon’s workload would not only improve the Packers’ offense, but would also wear down the opponent’s defense. This becomes even more important in January when most playoff games aren’t decided until late in the fourth quarter.

Putting Dillon on the field a lot more doesn’t have to mean putting Jones on the field a lot less. It just requires play-caller Matt LaFleur and offensive coordinator Nathaniel Hackett to be more creative. Jones is one of the better receiving backs in the league, yet he’s caught only 37 passes in 11 games. Even worse, only a handful of his 47 targets have come 10+ yards past the line of scrimmage. LaFleur and Hackett are treating Jones more like a traditional running back and less like the versatile gamebreaker he has the potential to be.

Instead of stapling Jones to the bench when it’s Dillon’s turn to be the featured back, why not use him like Tyler Ervin was last season? Put Jones in motion and give the defense something else to worry about because you can be sure no coordinator is losing sleep over having to defend the likes of Josiah Deguara, Marcedes Lewis, and Allen Lazard.

Jones’ versatility would also allow him to line up next to Dillon in the backfield, split out wide, or even in the slot. The goal should be to get as many playmakers on the field as possible. So while the coaches had the luxury of splitting snaps between Jones and Jamaal Williams in 2020 and between Jones and Dillon earlier this season, that kind of timeshare arrangement became harder to justify when Tonyan got hurt, and it’s impossible to defend now that Cobb is also out.

Playing Dillon and Jones together could be most beneficial in the red zone. A year ago, the Packers were historically good inside the 20. They rank a lowly 24th going into Sunday’s game versus Chicago. Injuries are part of the reason for the drop-off, but more of it has to do with defenses being much better prepared. What worked then ain’t working now.

In the pictures below, the Packers are in the red zone and facing a 3rd and 6. LaFleur goes pretty traditional. Four wide receivers (from left to right, Lazard, Marquez Valdes-Scantling, Davante Adams, and Equanimeous St. Brown), one running back (Jones), and no movement. The Rams will keep multiple sets of eyes on Adams and force either Lazard, St. Brown, or Valdes-Scantling to get open. That doesn’t happen. Jones is the only viable option, but that long of a throw would allow the linebacker to close quickly. Meanwhile, Dillon is doing what every fan is doing – watching. 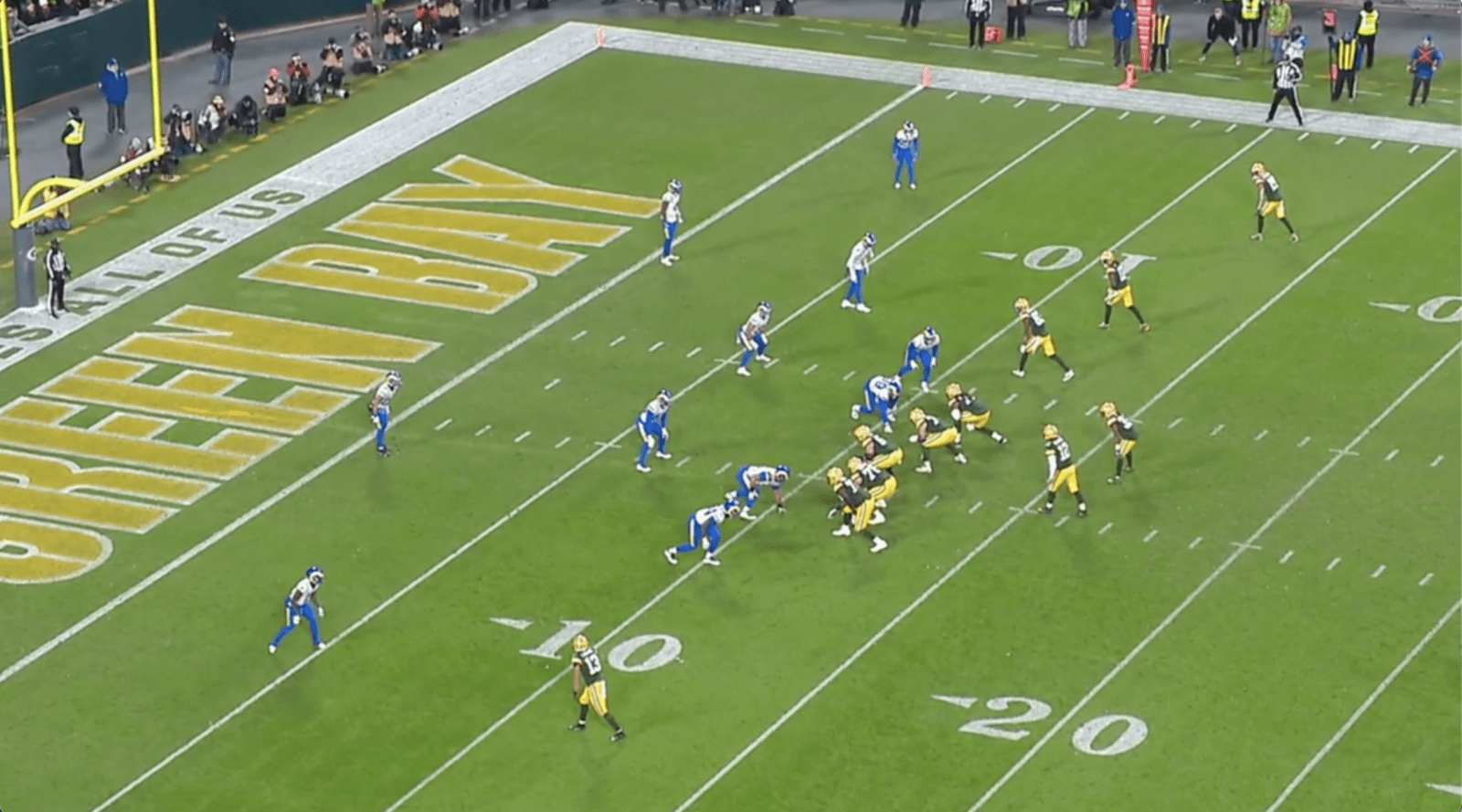 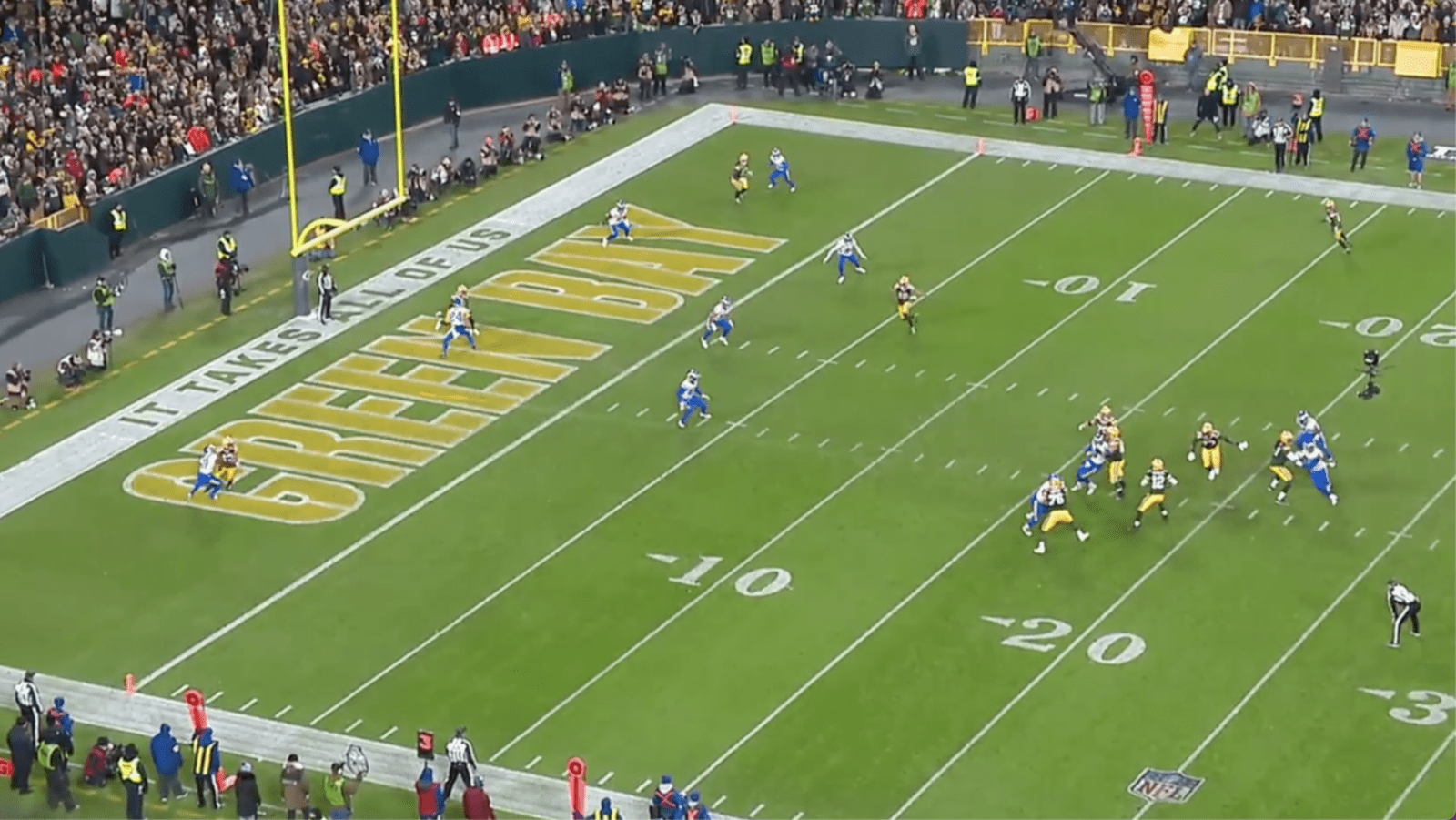 Why not use Dillon as the lone running back and take advantage of Jones’ unique skill set? Put him in motion. Put him in the slot. Put him out wide. Just do something creative that allows Jones to at least pick up the first down or helps free someone else in the end zone.

Relying more on Dillon as a runner and Jones as a receiver could make a difference on a shrunken field. Keeping Dillon from picking up 10 yards on three carries is no easy task. Neither is covering the quick as a hiccup Jones over the middle. But you know what is easy? Stopping either player when he’s on the bench.

None of this is to suggest playing either Dillon or Jones 60 snaps a game. There’s something to keeping them fresh and, especially in the case of Jones, keeping them healthy. But with Tonyan and Cobb out, the offense can’t afford to go with either Dillon or Jones 90+ percent of the time. Playing them together for at least 15 snaps would make the offense better as the calendar turns and games go from being important to being – at least in terms of football – life or death.

2 thoughts on “Time To Play AJs Together”