The Packers face the Bears tonight at Lambeau Field with a chance to clinch a playoff berth at stake. A win coupled with losses by New Orleans and San Francisco advances Green Bay to the postseason for the third consecutive year. To make that happen, here are five keys to victory:

The Packers are 9-0 this season when they force at least one turnover, so this has to be the No. 1 key to victory. Rookie quarterback Justin Fields has thrown eight interceptions (1 per every 25 attempts), including one in the first meeting between the longtime rivals. The former Ohio State star has also fumbled nine times, so expect Green Bay’s defenders to be going after the ball all night. That includes both when Fields is in the pocket and when he looks to run up the field.

I wrote extensively on Saturday about the importance of leaning on Aaron Jones and AJ Dillon, especially in the red zone. The two backs are among the three best players on the Green Bay offense, and they need to touch the ball more than the combined 25 times a game they’ve been averaging. This is especially true now that Randall Cobb has joined Robert Tonyan on injured reserve. The Bears’ run defense has been mediocre at best all season, and playing without perennial Pro Bowler Khalil Mack won’t help.

Right outside linebacker Robert Quinn is having a career season. The 10-year vet already has 12 sacks and over 40 pressures. He played pretty well in the first meeting, but he was never a big problem. Of course, Elgton Jenkins was blocking him for much of the game. Now that job will belong to Yosh Nijman, who’s gotten better with each start at left tackle. This will be yet another huge challenge for the former undrafted free agent. Fortunately, it’ll be easier to give him help with Mack not coming off the opposite edge.

Green Bay’s defense got a break when David Montgomery missed the game in Chicago, but the underrated running back will play tonight. He had 172 yards and averaged over five yards against the Packers last season. Granted, things have been different under Joe Barry, but Montgomery is a powerful back who’s tough to slow down if he gets even the smallest of openings. Look for the Bears to avoid nose tackle Kenny Clark and attack the edges. It’ll be up to Kingsley Keke and Dean Lowry to get off blocks.

The Packers are 0-2 coming the bye week under coach Matt LaFleur, and neither of those losses was close. Granted, the 2019 49ers and the 2020 Bucs were a lot better than the 2021 Bears. Still, Green Bay’s lack of energy in both games had nothing to do with the caliber of the competition. You can be sure LaFleur thought about that a lot the past two weeks, and he probably addressed his concerns numerous times with his players. It’ll be interesting to see how they respond. 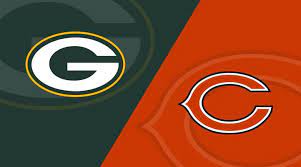 PREDICTION: Green Bay won by 10 in October, and there’s no reason to expect the results to be different tonight. That said, it would be a mistake to overlook the Bears. This will be their Super Bowl. They’ll also be healthier than they’ve been in weeks. Conversely, their opponent will be without seven starters, including three All-Pros and one Pro Bowler. And while the Packers have been able to overcome injuries all season, that doesn’t make it any less of a challenge.

The Packers are favored by 12, and while that’s probably fair, it’s just too many points to be giving in a nationally televised game between longtime division rivals. GREEN BAY 27-19 (Season record: 7-5 straight-up; 3-8-1 vs. the spread)

4 thoughts on “Preview: Packers vs. Bears”