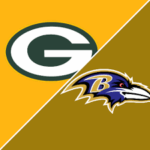 After rewatching Sunday’s game against the Baltimore Ravens, here are 10 things worth knowing:

1) Aside from missing throws to Davante Adams early and Allen Lazard late, Aaron Rodgers (23 of 31 for 268 yards and three touchdowns) was masterful. The Ravens generated plenty of pressure, but the future first-ballot Hall of Famer stayed calm in the pocket and consistently found the open receiver. Eight different players caught passes. And it wasn’t as if receivers were running wide open against a depleted Ravens’ secondary. Rodgers completed several throws that only one of the greatest QBs in NFL history would even attempt. He should now be the clear frontrunner for his fourth MVP.

2) This season has been a grind for Pro Bowler Aaron Jones, and Sunday was no exception. His longest run against the Ravens’ tough front seven was only 11 yards. But once again, the lack of explosive plays from the former UTEP star was due to shaky blocking by the O-line. Only left tackle Yosh Nijman was getting consistent movement at the point of attack, and center Lucas Patrick and left guard Jon Runyan didn’t strike with any explosion at the second level. Simply put, Jones had to fight for every one of his 58 yards. As usual, the barely 200-pounder did a commendable job in pass protection.

3) In his first start of the season, veteran right tackle Dennis Kelly had his hands full early on with Baltimore’s talented edge rushers. The offensive coaches wisely helped him by chipping with tight ends and running backs. The 31-year-old eventually settled down and played a little better in the second half. It wasn’t a surprise to see Kelly struggle. He lacks quick feet, so his technique needs to be on point if he’s to be effective in protection, and expecting his technique to be on point after not playing a single snap until last week was unrealistic. He should be better against the Browns on Saturday.

This is what can happen when Kelly (#79) gets sloppy with his footwork. Justin Houston (#50) blows right by him on his way to the quarterback.

4) Marquez Valdes-Scantling isn’t the same wide receiver whose inconsistency frustrated Rodgers and the coaching staff for much of the past three seasons. His routes are crisper, his hands are surer, and he’s taking advantage of his wide catching radius in the red zone. All of these improvements were on display against the Ravens. Valdes-Scantling caught five passes for 98 yards and a pretty touchdown in the fourth quarter. He made the Ravens pay for double-teaming Adams on almost every play. The 27-year-old also did solid work as a blocker in what was his best game of the season.

5) Tyler Davis played a season-high 19 snaps against the Ravens, and he took full advantage of his increased role. The second-year tight end beat corner Kevon Seymour down the seam for 22 yards in the second quarter, but it was his blocking that really stood out. The former high school quarterback and college wide receiver was surprisingly physical in the run game. In fact, he might’ve been more effective on this day than Marcedes Lewis. There’s no question the Packers miss Robert Tonyan, but his absence will be felt far less if Davis keeps playing as well as he did on Sunday afternoon.

1) Mark Andrews is a difficult matchup for most safeties, but the Packers traded up in the first round for Darnell Savage because they expected him to be better than most safeties. That wasn’t the case on Sunday. The former Maryland star was dominated by the Pro Bowl tight end for over 59 minutes. Fortunately, Savage finally stepped up with the game on the line. His deft deflection on the two-point conversion attempt kept the Packers from blowing a late 14-point lead. Hopefully, Sunday’s rough outing was a learning experience that will benefit the 24-year-old in the future.

2) Speaking of that two-point attempt, not enough credit is being given to the job done by Eric Stokes on the play. The rookie was all over Andrews, and it’s unlikely the pass would’ve been completed even without the deflection. The former Georgia star lined up opposite the Ravens’ No. 1 receiver most of the night, and while Marquise Brown didn’t have any explosive plays, he took advantage of an unusually large cushion to catch six passes. It makes sense to respect Brown’s great speed, but Stokes is every bit as fast. A veteran quarterback would’ve taken even more advantage of the soft coverage.

Because Stokes (#21) is giving Brown (#5) such a big cushion, the Ravens are basically handed 7 yards on a first-down play from Green Bay’s 39.

3) With Rasul Douglas playing so well, Kevin King was limited to 12 snaps on defense – only one on the outside. The fifth-year cornerback lined up in the box four times and in the slot seven times. The results weren’t particularly encouraging. King allowed an 11-yard completion to Andrews late in the game and looked a bit uncomfortable in his new role. His best moments came covering kicks – something he hadn’t done in three years prior to last Sunday. The former No. 1 pick used his good straight-line speed to get down the field in a hurry, and he showed absolutely no fear of contact.

4) If Kenny Clark’s importance to the defense wasn’t obvious before Sunday, it sure is now. His absence due to COVID negatively affected a number of other players. Ends Dean Lowry and Kingsley Keke had fewer one-on-one matchups and were non-factors for the most part, and without Clark’s push up the middle, backup quarterback Tyler Huntley had a much easier time of first avoiding and then taking advantage of the overaggressive rushes of outside linebackers Rashan Gary and Tipa Galeai. Whether any nose tackle is worth $17.5 million a year is no longer a question in Green Bay.

5) With Clark out, T.J. Slaton played a lot more than usual (25 snaps). Surprisingly, he was primarily used in passing situations. The rookie from Florida worked hard but accomplished little against backup Ben Cleveland and starters Kevin Zeitler and Bradley Bozeman. While Slaton is a terrific athlete for his size, he was handled relatively easily by Baltimore’s interior offensive linemen. That’s because the 340-pounder was consistently a tad late off the ball and didn’t use his hands effectively. How he responds to coaching will determine whether he becomes Gilbert Brown or Colin Cole.

FINAL THOUGHTS: It’s tough to win on the road – just ask Arizona – so even a sloppy 31-30 victory over the depleted Ravens should be appreciated. That said, something must be done about special teams before it’s too late. A week after an embarrassing performance against Chicago, the Packers were only marginally better on Sunday. General manager Brian Gutekunst deserves credit for his in-season signing of Douglas, but his refusal to do anything to improve special teams is baffling. There have to be players on the street or other practice squads that could help. Of course, the time has passed to do the one thing that could’ve helped the most – replacing Maurice Drayton with someone who knows what he’s doing.