Green Bay (11-3) hosts Cleveland (7-7) on Christmas Day in what will be the 21st meeting between two of the league’s most iconic franchises. If the Packers are going to come out on top and move a step closer to clinching the No. 1 seed in the NFC, here are five keys to victory:

1. SLOW DOWN THE RUSH

Nick Chubb, who’s averaging 5.4 yards per carry, is one of the most talented running backs in the league, and he gets plenty of help from an O-line that features two terrific road graders in guards Wyatt Teller and Joe Bitonio. Getting Pro Bowl nose tackle Kenny Clark back from the reserve/COVID-19 list will obviously help the Packers deal with Chubb, but that won’t be enough. The defensive ends and linebackers must play a lot better than they did last week against Baltimore.

2. SLOW DOWN THE RUSH II

Assuming Myles Garrett plays – he didn’t practice on Thursday due to a groin injury – backup left tackle Yosh Nijman will face arguably his biggest challenge of the season. And that’s saying something because he’s already gone against San Francisco’s Nick Bosa, the Rams’ Von Miller, and Chicago’s Robert Quinn. But Garrett, if healthy, is better than all of them. His combination of size, speed, and strength is unique. The Packers can’t allow him to live in the backfield all day.

3. BE SMARTER ON DEFENSE

Paying attention to detail is one of the reasons the Packers’ defense has been able to survive and at times thrive without Jaire Alexander and Za’Darius Smith, but that trait hasn’t been on display the past month. Lately, the D has been making all kinds of uncharacteristic mental mistakes, including having only 10 players on the field late in last week’s close win over Baltimore. Browns’ coach Kevin Stefanski is a creative play-caller, so the defense needs to stay locked in.

The Browns have been OK against the run this season, but when they’ve struggled, it’s usually been against teams that pound the ball up the gut. Cleveland’s interior defensive linemen and inside linebackers are ordinary and inconsistent. The Packers drafted a player in the second round in 2020 for just this type of game. It’s going to be pretty cold, and the footing at Lambeau could be tricky for the visitors. All 245 pounds of AJ Dillon needs to touch the ball between 15 and 20 times.

The Packers have started slowly all season. They’ve been behind after the first quarter in all but a few games, and while playing that way hasn’t been much of a handicap, it’s never a good idea. It’s especially not a good idea against quality teams in the postseason. Saturday would be an opportune time to flip the script and jump out to an early lead. Not only might it start a positive trend, but it could also demoralize an opponent who’s banged up and playing on a very short week. 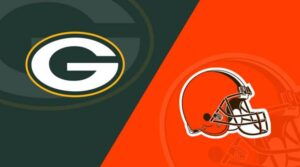 PREDICTION: Cleveland had 16 players on the reserve/COVID-19 list as of Thursday night, including quarterback Baker Mayfield, wide receiver Jarvis Landry, left tackle Jedrick Wills Jr., defensive lineman Jadeveon Clowney, and cornerback Greg Newsome II. The majority should return in time for Saturday’s game, but it’s difficult to make a prediction until learning exactly who’s in and who’s still out. If most of the Brown’s key starters are back, they certainly have a chance to pull an upset. They are a very talented but wildly inconsistent team, capable of beating Cincinnati by 25 one week and losing to New England by 38 seven days later.

2 thoughts on “Preview: Packers vs. Browns”