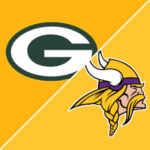 After rewatching Sunday night’s game against the Minnesota Vikings, here are 10 things worth knowing:

1) The beautifully executed first pass of the game from Aaron Rodgers to Davante Adams was a precursor of things to come. The two stars connected 11 times for 136 yards and a touchdown, taking full advantage of a depleted Vikings’ secondary. No Packers quarterback has ever made throwing the ball look so effortless, and no Packers wide receiver has ever made catching the ball look the same way. The only negative was a couple of forces on third down. Rodgers believes he can complete any pass to Adams, and sometimes that way of thinking needlessly ends drives.

2) Aaron Jones had only six runs over 15 yards in the first 14 games, but he’s had three the past two weeks, including a pair on Sunday night despite carrying the ball just eight times. The Pro Bowl alternate is finally getting some good blocking on the second level. Against the Vikings, both explosive plays were to the left side behind guard Jon Runyan and tackle Yosh Nijman, who are getting better at initiating contact with moving targets. After dipping as low as 4.2, Jones’ yards per carry average for the season is now up to 4.7. The former UTEP star also caught five passes.

3) On a bitterly cold night, AJ Dillon had exactly the kind of game GM Brian Gutekunst must’ve envisioned when he used a second-round pick on the former Boston College star in 2020. The 250-pounder carried the ball 14 times for 63 yards and scored two touchdowns against the Vikings. Not surprisingly, Dillon got better as the game moved along and Minnesota’s front seven players began to tire. His last eight carries gained 45 yards. He also caught a pair of passes, and his block of a blitzing Anthony Barr gave Rodgers just enough time to throw his first TD of the night to Allen Lazard.

Dillon’s block wasn’t perfect, but there aren’t many running backs that could even slow down the hard-charging 250-pound outside linebacker.

4) I thought Dennis Kelly was an excellent addition when he signed right before the start of training camp, but I had a few doubts after watching him struggle in the preseason. Fortunately, that was just a veteran shaking off the rust and getting acclimated to a new system. In his third start in place of an injured Billy Turner at right tackle, Kelly might’ve been the Packers’ best O-lineman against the Vikings. He was flawless in protection and physical in the run game. The former Purdue star also caught a break by not having to deal with either Danielle Hunter or Everson Griffen.

5) Give Marquez Valdes-Scantling a lot of credit. The fourth-year wide receiver was virtually ignored in the passing game (three targets and one catch for three yards), but he didn’t let that affect his effort as a blocker. The former South Florida star was physical all night, even when asked to engage with much bigger players. This unselfishness is even more impressive when considering that Valdes-Scantling will become a free agent in a few months. Plenty of receivers would be a lot more interested in compiling stats than doing the dirty work that wins games.

1) After getting gashed by Nich Chubb last week, it was evident from the start that outside linebackers Preston Smith and Rashan Gary were determined to do a better job of setting the edge against Dalvin Cook. Mission accomplished. The dynamic running back gained only 13 yards on nine carries. To be fair, the job was a lot easier on a sloppy field and with Sean Mannion under center. Still, it was nice to see Smith and Gary caring as much about stopping the run as rushing the QB, which by the way, they also did well. The two combined for two sacks and 10 pressures.

2) De’Vondre Campbell had his usual strong game. The veteran inside linebacker was physical against the run, and he allowed only 23 yards on the five passes that were completed against him. The surprise was how well his partner Krys Barnes played. Eight days after a forgettable performance against Cleveland, the former UCLA star bounced back in a big way. While his numbers weren’t overly impressive (five tackles), he generated some real pop on contact and reacted quickly in coverage. The Packers desperately need this version of Barnes to show up when the playoffs begin.

3) Like Barnes, nose tackle T.J. Slaton also rebounded from a rough outing against the Browns. The massive former Florida star kept his pad level low (for the most part) and proved to be a handful for Minnesota’s interior O-linemen. Most of Slaton’s snaps came in sub-packages, and while he didn’t record any pressures or sacks, he did push the pocket on several occasions. After barely seeing the field in Weeks 10 through 14, Slaton has played 70 snaps in the past three games, and he’s been pretty good in two of them. Two out of three ain’t bad, especially for a still very raw rookie.

4) Dean Lowry and Tyler Lancaster were built for games played in less than ideal conditions. The two veteran defensive linemen are tough SOBs who not surprisingly thrived on a frigid January night at Lambeau Field. That’s because the heart often trumps athleticism when the temperature gets below 10 degrees. Lancaster lined up at end and tackle and was difficult to move at both spots. Lowry was even more effective. The former Northwestern star was rock solid at the point of attack, and as an interior rusher, he contributed a handful of pressures and batted down a pass.

Lowry (#94) and Lancaster (#95) helped to set the tone early on defense by getting off blocks and stuffing Cook on this run in the first quarter.

5) Elevated from the practice squad on Saturday, Abdullah Anderson made the most of his 16 snaps. The journeyman defensive lineman was OK at the point of attack, and he provided a few nice inside rushes. The 300-pound former Bucknell star used his hands effectively and showed just enough twitch to get through gaps. With Kingsley Keke struggling and undrafted rookie Jack Heflin still not ready for prime time, there might be a place for Abdullah on the active roster in the postseason, especially if star pass rusher Za’Darius Smith is unable to return.

FINAL THOUGHTS: Kirk Cousins missing the game was a blow to Minnesota, and the Packers took full advantage. The only downside is we have no idea what to expect when the defense takes the field in the divisional round of the playoffs. Will we see the unit that performed so well in October and most of November or the unit that struggled after Thanksgiving? Next week versus the Lions won’t provide any clues, even if head coach Matt LaFleur decides to play his stars for some reason. The only thing I know for sure about the defense is that it would benefit greatly from really cold weather. It’s amazing how much quicker guys like Lowry, Barnes, Adrian Amos, and Chandon Sullivan look on a hard and slick field.