A year ago, a team from the NFC West (Los Angeles) with a banged-up quarterback (Jared Goff) came to Lambeau Field for a divisional-round game. Tonight, another NFC West team (San Francisco) with a banged-up quarterback (Jimmy Garoppolo) will come to Lambeau Field for a divisional-round game. The difference? Approximately 25 degrees at kickoff. If the Packers are going to advance to the NFC championship for a third consecutive season, here are five keys to victory:

This should probably be key 1, 2, 3, 4, and 5, considering the Packers are 30-0 under coach Matt LaFleur when winning the turnover battle and 11-0 this season when creating at least one turnover. The easiest way to accomplish this against the 49ers is to get pressure on Garoppolo, who’s thrown 33 interceptions in his last 40 games. An injured thumb and a lack of experience in cold weather – temps were at least 40 degrees in all 68 of his prior starts – should make him ripe for turning the ball over. Of course, a wind chill in the single digits will only matter if the Packers’ D forces Garoppolo to throw the ball a lot more than the eight times he threw it in the NFC Championship Game in 2019. That brings us to key No. 2…

2) SLOW DOWN THE RUN GAME

The 49ers were able to throw the ball only eight times in the 2019 NFC Championship Game because the Packers had no answer for little-known Raheem Mostert, who ran for 22o yards. It was one of the most embarrassing defensive performances in postseason history. Watching inside linebacker Blake Martinez trying to chase down a back with 4.32 speed was a nightmare that still haunts Packers fans to this day. The good news is that Mostert is on IR, and Martinez is on the Giants. Newly-minted All-Pro De’Vondre Campbell gives the Packers a much better chance of slowing down the 49ers on the ground, provided that the outside linebackers do a better job of setting the edge than they’ve done recently.

All the talk this week has been about stopping Pro Bowl running back/wide receiver Deebo Samuel, and that makes perfect sense considering how great he’s been this season. But the Packers can’t let George Kittle’s modest stats (nine catches for 78 yards) in the past four games lull them into a false sense of security. He’s still one of the most dangerous tight ends in the league. Defensive coordinator Joe Barry must come up with a better plan to deal with Kittle than the one he employed against Mark Andrews in Week 15. Baltimore’s Pro Bowl tight end caught 10 passes for 136 yards and two touchdowns. It wasn’t until Barry started giving overmatched safety Darnell Savage help that the carnage slowed down.

4) STAY COMMITTED TO THE RUN

In their last two postseason losses, the Packers’ offensive line struggled to protect quarterback Aaron Rodgers. That job won’t be any easier tonight. The 49ers have multiple big-time pass rushers, including Nick Bosa. Complicating matters is that All-Pro left tackle David Bakhtiari is listed as questionable, and right tackle Billy Turner hasn’t played since Week 14. The best way to slow down the rush and make life easier for the offensive line is to run the ball. There’s no better 1-2 punch in the league than Aaron Jones and AJ Dillon, so play-caller LaFleur and soon-to-be MVP Rodgers must really commit to the ground game. They need to constantly be reminded that it’s OK to call three consecutive runs.

This didn’t happen the last time the Packers met the 49ers in the playoffs, and it hasn’t happened very often this season. Despite winning 13 of 17 games, Green Bay was outscored 77 to 37 in the first quarter. That’s not a big deal against the Chicagos and Detroits of the NFL, but coming from behind isn’t a recommended strategy against much better teams. The frigid conditions make getting off to a fast start even more important. San Francisco just played a physical game six days ago, so they won’t be as fresh as the Packers. They also won’t be comfortable in the elements, regardless of how many of their players go sleeveless. So get ahead early and make them start California dreamin’ ASAP. 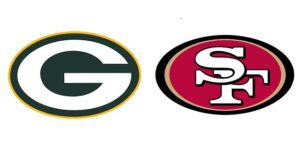 PREDICTION: As anybody who’s followed me for a while knows, this is the exact scenario that’s had me worried since literally the day after last season ended. The concern only grew after Barry was hired in February, and the possibility of him going mano a mano with Kyle Shanahan turned into reality. The 49ers matchup against the Packers as well as any team in the NFC, including Tom Brady and the Bucs, although Mother Nature does have me feeling a little less stressed (I’ll be chewing five extra strength Tums tablets in the next few hours instead of 10).

While the 49ers may be built for the cold, being built for the cold and playing in it are two entirely different things. While the icy air might not be a huge problem, handling the ball and keeping their footing on a hard and slick field could be. It’s not a coincidence that the best game the Packers have played under LaFleur – last season’s 40-14 thrashing of the Titans – came on a cold and snowy day. The Titans’ players looked more like skaters than football players.

Still, all the pressure is on the Packers. They’re the team at home. They’re the team coming off a bye. And most importantly, they’re the team with a very uncertain future after this season. The 49ers are playing with house money. They barely made the playoffs in a year that was supposed to be nothing more than a bridge from Garoppolo to Trey Lance.

And despite all the happy talk about getting healthy at the perfect time, the Packers could go into tonight’s game without Bakhtiari, wide receiver Valdez-Scantling, offensive lineman Elgton Jenkins, and tight end Robert Tonyan on offense, and with Jaire Alexander and Za’Darius Smith playing limited snaps on defense. That’s far from a team at full strength.

The Packers are favored by 5, and while my gut tells me the 49ers will not only cover but could very well win outright, my head just can’t accept the possibility that Rodgers will get knocked out of the playoffs for the second time in three years by Garoppolo, especially on a frigid night. GREEN BAY 30-23 (Season record: 11-6 straight up; 6-10-1 vs. the spread)

One thought on “Preview: Packers vs. 49ers”