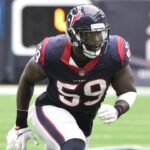 The Packers signed Whitney Mercilus to a 1-year deal on Wednesday, less than 24 hours after the veteran outside linebacker was released by the rebuilding Houston Texans. The 31-year-old has 57 sacks in 134 games (102 starts), including three this season.

With Pro Bowler Za’Darius Smith on injured reserve and Preston Smith dealing with an oblique injury suffered last Sunday against the Bears, general manager Brian Gutekunst needed to add an experienced body at outside linebacker. While second-year pro Jonathan Garvin hasn’t been bad in 150 snaps, he’s simply not ready to be a key player for a team looking to get to the Super Bowl after losing in the NFC championship game the past two years.

Mercilus was averaging 35 snaps per game for Houston, and that’s too many at this point in his career. While the former Illinois star has a more than respectable three sacks this season – a number that ties him with Kenny Clark for most on the Packers – those three sacks represent about half of his total pressures. That’s one of the reasons he was being used less in obvious passing situations in recent weeks. The other reason is that the reeling Texans wanted to get a couple of their promising young edge rushers (Jacob Martin and Jonathan Greenard) on the field more.

To be fair, Mercilus was chipped by tight ends and running backs more than any of his teammates. For example, he was left one-on-one with the tackle only six times in 14 rushes against the Patriots. So while he had no sacks and only the one pressure seen below, the extra attention No. 59 drew helped Martin and Greenard have productive games.

It should also be pointed out that Mercilus, who was named second-team All-Pro in 2016, was lining up at end in new defensive coordinator Lovie Smith’s scheme after spending the first nine seasons of his NFL career at outside linebacker, the position he’ll play in Green Bay. At 259 pounds, he’s better equipped to play with his hand off the ground.

What will the Packers be getting in Mercilus? Based on what I saw after watching all of his snaps from the first six weeks, probably something similar to what the Packers got from Clay Matthews late in his career. By that, I mean an aging pass rusher who can’t get consistent pressure for 60 minutes but who plays extremely hard and can still be disruptive from time to time. The most impressive thing about Mercilus’ three sacks this season are the tackles they came against. Cam Robinson (Jags), Dion Dawkins (Bills), and Taylor Moton (Panthers) are all above-average pass blockers.

In the first clip below, you can see Mercilus (#59) – lined up at right defensive end – using his hands effectively to get around Dawkins in a game against the Bills. In the second clip, Mercilus – lined up at left defensive end – relies on quickness to beat Moten in a game against the Panthers. Both sacks came in obvious passing situations. At the age of 31, he no longer possesses the explosiveness he had in his prime, but he’s still a decent athlete with a lot of savvy.

As far as playing the run is concerned, Mercilus has been at least adequate throughout his career, including this season at defensive end. He battles hard, has active hands, and flashes some power at the point of attack. But this part of the game has never been his strength, and it’s certainly not the reason Gutekunst brought him to Green Bay.

As was the case with veteran inside linebacker Jaylon Smith, who signed a few weeks ago after being dumped by the Dallas Cowboys, there’s really no downside to this acquisition. Mercilus signed a one-year contract worth the pro-rated vet’s minimum of $716K, so whatever he adds to the defense for the remainder of the season will be a bonus.

To sum it up, Mercilus isn’t close to the dominant player who averaged eight sacks and just under 60 pressures a season from 2013 to 2016, but he’s also not some washed-up stiff just hanging around to collect a paycheck. His arrival in Green Bay will definitely improve the depth at outside linebacker, and it should bolster the pass rush to some degree. That’s more than any team has the right to expect when it signs a 10-year veteran off the street in October.