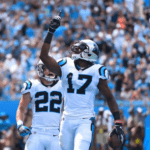 Wide receiver Devin Funchess, who opted out of last season due to the coronavirus, has agreed to a $750,000 pay cut and will return to the Green Bay Packers in 2021.

Funchess hasn’t played a snap in the NFL since fracturing his clavicle on Sept. 8, 2019, while a member of the Colts. Prior to signing a one-year deal worth $10 million with Indianapolis, the former Michigan star spent the first four seasons of his career in Carolina.

The Panthers selected Funchess 41st overall in the 2015 draft, but he’s never had more than 63 catches, 840 yards, or 8 TDs in a season. While blessed with terrific size (6-4, 225), strong hands, and the spatial awareness to pick apart zones, his lack of speed (4.65) keeps him from being much of a threat down the field. He’s caught only 15 passes over 20 yards in 62 games. For the sake of comparison, Marquez Valdes-Scantling has 22 receptions over 20  yards in 48 games. And Funchess’ yards per target of 7.2 is well below Allen Lazard’s career number of 9.4.


Agreeing to a pay cut will likely get Funchess to training camp with the Packers, but he’ll have to fight just to make the roster. Valdes-Scantling, Lazard, and All-Pro Davante Adams are locks to be part of the final 53, so Funchess will be competing with returnees Equanimeous St. Brown, Malik Taylor, Reggie Begelton, Juwann Winfree, Chris Blair, and any other receivers acquired between now and the end of August for what figures to be two or three jobs.


By reducing Funchess’ salary by $750K, the Packers now find themselves about $8.7 million above the salary cap. They have until next Friday to figure out a way to get under the cap. Extending Adams, restructuring quarterback Aaron Rodgers, and moving on from outside linebacker Preston Smith are all distinct possibilities in the coming days.