Now Or Never For Nijman 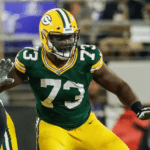 If Jordan Love was the young player most affected by not having any preseason games last summer, Yosh Nijman was a close second. The Packers kept the former undrafted free agent from Virginia Tech on the 53-man roster for the past two seasons, but thanks to the coronavirus, they still don’t really know what they have in the 25-year-old left tackle.

Nijman certainly looks the part. He has prototypical size (6-6 1/2,  324), long arms, and better speed (4.8) than many tight ends. So why did such a physically gifted player from a big-time program go undrafted? Simple. He wasn’t all that impressive in college. Despite having a physical advantage over most of the defensive linemen he faced on Saturdays, Nijman didn’t come close to dominating. In fact, there were times when he struggled to keep average pass rushers away from the quarterback. Those problems continued when he got to Green Bay.

In the first video against the Chiefs, Nijman (#73) got sloppy and gave up the edge to backup defensive end Demone Harris (#52). These kinds of plays showed up way too many times. He needs to do a much better job of keeping his hands inside and bringing his feet with him in protection. Because when he does, as is the case in the second video against Ravens’ outside linebacker Jaylon Ferguson – a third-round draft pick – he can be tough to beat.

In the run game, while Nijman’s not a road grader – even at his size – he understands angles and positioning and is a particularly effective cut blocker. He also gives good effort. This won’t be what keeps him from sticking in the NFL.

Overall, there were enough positive plays in the summer of 2019 to merit keeping Nijman on the 53, even though he wasn’t active for a single game. I’m guessing GM Brian Gutekunst had no intention of essentially redshirting Nijman for a second season, but the coronavirus may have forced his hand. The last thing any team wants to do is give up on a player too soon – especially a left tackle – and without a preseason, there probably weren’t enough meaningful snaps to allow Gutekunst to feel confident about either playing Nijman in a real game or letting him go.

Regardless of whether or not there’s preseason football this summer, the Packers are going to have to make a firm decision on Nijman by the end of training camp. He’ll either be deemed ready to start at left tackle or be the top backup until David Bakhtiari returns from the knee injury suffered last New Year’s Eve, or he’ll be sent on his way.

The guess here is that Nijman will be hard-pressed to be on the 53-man roster come week 1. The Packers will almost certainly select a tackle early in next month’s draft, and I just didn’t see an NFL tackle when I watched his college tape or when I watched him practice a couple of years ago. Then again, I didn’t get to see him at all last summer, so I have absolutely no idea how much he’s improved under the tutelage of outstanding offensive line coach Adam Stenavich. And that’s why there are few players I look forward to seeing more in August than Nijman.