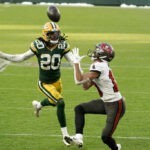 Robert Frost would absolutely love the Green Bay Packers’ offseason because the team has certainly taken the road less traveled. Aside from re-signing Pro Bowl running back Aaron Jones, nothing coach Matt LaFleur and GM Brian Gutekunst have done the past few months has been conventional. Whether that’ll make “all the difference” remains to be seen. Here are four recent examples of the Packers following the philosophy of the iconic poet:

1) After parting ways with Mike Pettine in late January, LaFleur hired Joe Barry as his replacement. The same Joe Barry who failed miserably in his two prior stints as a defensive coordinator. The same Joe Barry who was passed over three times in the past 12 months by the Rams and Chargers. And while it’s fair to point out the extreme lack of talent he inherited in Detroit, his two 28th-ranked defenses in Washington are harder to defend. He had some good players (Ryan Kerrigan, Trent Murphy, Preston Smith, Josh Norman, Bashaud Breeland, DeAngelo Hall, etc.). Smart minds can agree to disagree on how much blame Barry deserves for those two unsuccessful stints in Motown and the nation’s capital, but it’s impossible to dispute that almost anybody else not named Dom Capers would’ve been a far more popular – not to mention far more conventional – choice to lead the defense next season.

2) Almost as surprising as the Barry hiring was the decision a few weeks earlier to promote Maurice Drayton to special teams coordinator. After all, the last line of his resume reads “top assistant to Ron Zook in 2018 and to Shawn Mennenga in 2019 and 2020.” That’s kind of like the CEO of Universal Pictures hiring one of the executive producers of Cats to direct his next movie. LaFleur was quick to defend the well-liked Drayton when it came to the terrible special teams play the past three seasons, but what he said was exactly what Mike McCarthy said when he promoted Zook and before that Shaun Slocum. None of this means Drayton can’t succeed, but it does mean that once again the Packers stared down that fork in the woods and decided to take the road that “wanted wear.”

3) Gutekunst did his best Frost impersonation when he re-signed Kevin King. While the veteran corner wasn’t the only reason the Packers lost the NFC championship game, no player did more to keep the No. 1 seed in the NFC from advancing to the Super Bowl. His hold on 3rd down with 1:46 left in the game will live in infamy. Players who fail so miserably on the biggest stage almost never return to the scene of the crime, and yet the Packers went out of their way to keep King. Rather than allowing the free agent to sign with another team quietly, they gave him a 1-year contract worth up to $6 million. So the Packers not only retained the 26-year-old; they gave him a nice raise.

4) While every other playoff team with a high-priced quarterback (Tampa Bay, Kansas City, Pittsburgh, and the Los Angeles Rams) did a major restructuring to clear millions of dollars of cap space, Gutekunst chose – at least for now – to do nothing with Aaron Rodgers’ contract. That left the reigning MVP with the highest cap number in the league ($37.2M), and the Packers with less cap space heading into free agency than all but five teams. Not surprisingly, of the 100+ players who found new homes last month, not one will be buying a plane ticket to Green Bay. And while this could change at any time, right now Packers fans can only look back at the past few weeks and “sigh.”

It’s been a strange, and at times, frustrating offseason for Packers fans. As an English major, I often re-read “The Road Not Taken” when trying to lift my spirits. But you know what works even better? Remembering that this franchise won 56 games in five seasons with Mike Sherman as GM and won a Super Bowl with Mike McCarthy as coach. So while a poem from a New England bard is all well and good, having QBs from Southern Miss and Cal is even better.