Final Thoughts (For Now) On Rodgers 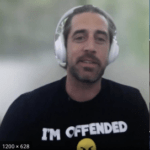 As the Aaron Rodgers saga moves past day 50, the disgruntled quarterback and the beleaguered front office appear no closer to a reconciliation. The reigning league MVP skipped all offseason activities, and there’s no telling whether he’ll show up when the Packers begin training camp in late July. And while the topic has already been exhausted by the media and continues to exhaust fans, I have four final thoughts before I let it go and simply enjoy the next six weeks before dealing with the potential Armageddon that awaits:

1) Amidst all of the mindless and ill-informed babble coming from the national media, ESPN’s Adam Schefter actually said something interesting the other day. He opined that Rodgers doesn’t want to play for the Packers because he’s tired of making people he doesn’t like or respect look good. Those people, I assume, are president Mark Murphy, GM Brian Gutekunst, and VP/director of football operations Russ Ball. And if Schefter’s hypothesis is accurate, it’s understandable. A 5-12 season without Rodgers would certainly turn the spotlight on those three people – a spotlight each has been able to avoid because the Packers keep winning. In fact, Gutekunst is probably in line for a big contract extension based on the team’s 26-6 record in the past two seasons. But does he deserve it? Rodgers probably thinks not, and what better way to prove it than by not playing for the Packers this season? Whether that’s enough motivation to make the 37-year-old forfeit tens of millions of dollars is a whole other thing.

2) Murphy should say nothing about the situation because anything he says – no matter how innocuous – is almost certainly going to only further antagonize Rodgers. In May, Murphy wrote that this drama has divided the fan base. He’s right. Talk to 100 fans – and I probably have on my different social platforms – and around 50 will support the player and around 50 will support management. To be fair, both sides can make a strong argument. And just 10 days ago, Murphy called Rodgers a “complicated fella” when speaking at an event at Lambeau Field. Again, he’s right. Rodgers is complicated, and that’s not necessarily a bad thing. Besides, he could’ve called him a lot worse and also been right. But Murphy needs to read the room. He’s dealing with a person who holds a grudge with more ferocity than a mama bear holds her cubs, so saying nothing is the way to go. And I’m sure that can’t be easy. I can only imagine how many vile e-mails and phone calls Murphy has received since the draft? That said, he simply needs to stay above the fray if he wants this to end with Rodgers leading the team out of the tunnel in New Orleans.

3) Murphy, Gutekunst, and Ball should do whatever is necessary to get Rodgers on the field in 2021. This team is built to win right now and the season simply can’t begin with Jordan Love or (gasp) Blake Bortles under center. But whatever those three men do, they absolutely can’t give up the option of moving on from Rodgers after this season. And that’s what makes this such a difficult situation. It’s likely that – among other things – Rodgers wants a guarantee that he’ll be around for at least another two or three seasons. And while he has every right to want that, the Packers have every right to say no. Give him more money in 2021. Give him a bigger say in player moves. Heck, give Shailene Woodley a plane to get her in and out of Green Bay in the time it took for The Mauritanian to leave theaters. But don’t give up the ability to move on from Rodgers in 2022. The worst thing the Packers could do is to acquiesce to all of his demands only to see his play slip, the team take a step backwards, and Love shine this summer.

4) I made the mistake of checking out another Packers blog the other day (I was really bored) and came across this headline, “Packers are a playoff team even without Rodgers.” Heck, that story was funnier than the Sunday comics. The Packers are not a playoff team without Rodgers. In fact, they’d be hard-pressed to win seven games. Sure the Packers have some outstanding players. Aaron Jones, Davante Adams, David Bakhtiari, Elgton Jenkins, Kenny Clark, Za’Darius Smith, and Jaire Alexander are legit stars. But what makes Rodgers so unique is his ability to elevate the less special players. Without his immense talent and superior knowledge, guys like Robert Tonyan, Allen Lazard, Lucas Patrick, and Billy Turner will likely regress. And a defense that hasn’t been good enough for a decade won’t be helped by being on the field a lot more. Gutekunst, and before him Thompson, have not drafted particularly well the past six or seven years, but Rodgers is like a very strong deodorant because he covers a lot of stink. The stink will be a lot more prevalent if he’s not around. So people are going to have to be willing to accept a dreadful season if Rodgers isn’t around – and hope like heck that Love develops quickly enough to right the ship in 2022.

So what will happen? I still expect the Packers to eventually cave and give Rodgers pretty much everything he wants. That might not happen until well into training camp, but I think it’ll happen. What should happen? The Packers need to do everything possible to get Rodgers on the field in time for the opener on Sept. 12 – short of giving up their ability to move on from him after this season. That should be a deal-breaker. Of course, drawing such a hard line is a lot easier to do when your livelihood isn’t affected by the team’s performance. Regardless of what happens, enjoy what’s left of June and July because something tells me we’re all in for an extremely bumpy August.

4 thoughts on “Final Thoughts (For Now) On Rodgers”