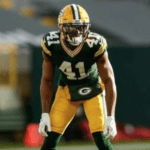 The drama surrounding quarterback Aaron Rodgers figures to dominate much of training camp, but other stories will be worth following. One will be which under-the-radar young players step up and steal a spot on the 53-man roster and/or earn more snaps than expected during the regular season. Corner Chandon Sullivan, outside linebacker Randy Ramsey, and inside linebacker Krys Barnes are just a few recent examples.

The following are five under-the-radar players worth keeping a close eye on as the calendar turns from July to August:

The second-year safety from Baylor spent most of last season on the practice squad, but he made the most of his 27 snaps in four games. Black forced a fumble, delivered a number of big hits, and proved surprisingly versatile. He lined up deep, in the box, and in the slot. He also looked pretty good on special teams. The 24-year-old didn’t run a fast 40 (4.57) at his pro day, but he has good short-area burst and closing speed. While the Packers are set with starters Darnell Savage and Adrian Amos, it’s not unrealistic to think Black could challenge for playing time in some of the sub-packages. Journeyman Will Redmond was on the field for over 400 snaps last season, and while he did an OK job, he’s the kind of player a good team should always be looking to replace. Black will face tough competition for a roster spot from Redmond, fellow second-year man Vernon Scott, and highly-regarded undrafted rookie Christian Uphoff, but if his cameo appearances a year ago are any indication, he shouldn’t be overlooked.


The undrafted wide receiver from San Jose State is easy to dismiss. He’s not big; he’s not blazing fast, and he didn’t face the toughest competition in college. But there’s something about his tape that makes me think he’s going to be more than just a camp body. The 24-year-old keeps working to uncover when the pocket breaks and is effective improvising and finding open spaces in coverage. That should endear him to his QB. Gaither also shows good ball skills. He makes savvy in-air adjustments and tracks the ball well over his shoulder. His lack of strength could be a problem when it comes to shaking more physical corners at the line of scrimmage and blocking for the run, so it wouldn’t be a surprise to see him start the season on the practice squad, especially following the trade for Randall Cobb on Wednesday. Then again, after Davante Adams, Marques Valdes-Scantling, Allen Lazard, third-round draft pick  Amari Rodgers, and perhaps Devin Funchess, the competition is wide open. Returning veterans Equanimeous St. Brown and Malik Taylor are probably the favorites if the Packers choose to keep six wide receivers, but neither did much last season, and the coaching staff might be ready to give a fresher face a chance.


The first thing you notice on tape about the second-year outside linebacker from Utah State is his athletic ability. He sure doesn’t move like he’s 6-foot-5. He’s a quick-twitch athlete with the short-area burst, acceleration, and top-end speed to fly off the edge. His closing burst is also very impressive. Galeai, who played all nine of his snaps in the opener against Minnesota, was too small and too raw to hold up against the run or consistently beat NFL offensive tackles as a rookie, but hopefully, he spent the past year adding weight and expanding his repertoire of pass rush moves. If he did, he’d have a legitimate chance to earn a backup spot behind veterans Za’Darius Smith, Rashan Gary, and Preston Smith. His main competition figures to be Ramsey and Jonathan Garvin, a couple of young players who didn’t show much in limited snaps last season, and undrafted rookie Carlo Kemp. If it comes down to special teams, Galeai’s mix of size and speed could give him the edge. He should be made for covering kicks.

I beat this drum a year ago, and I’m going to do it again. Despite playing only 176 snaps at inside linebacker during the regular season, Summers was one of the best defenders on the field in the second half of the NFC title game against Tampa Bay. The third-year player from TCU was strong against the run and adequate in coverage. And while he might not have the fluidity to consistently stay with backs and tight ends in the passing game, there’s no reason why he can’t be useful on early downs. Summers ran a blazing 40 prior to the 2019 draft, and that speed shows up on tape. He can accelerate and close fast to the sideline and has good playing range. His tackling still needs work, but he did show improvement last season. When he fails to get the ball carrier to the ground, it’s usually due to not securely wrapping or coming to balance in space. Getting on the field won’t be an easy task. Inside linebackers coach Kirk Olivadotti really likes Barnes and Kamal Martin, and veteran De’Vondre Campbell was signed in free agency. It’ll be up to Summers to prove that he’s more than just a very effective special teams player.

Read through any of the meaningless 53-man roster projections put forth by writers in late July, and there won’t be many that include Williams’ name. And there’s a reason why. The former Notre Dame star has played in only seven games snd carried the ball only seven times in the past two seasons. Despite doing next to nothing since being drafted in the sixth round in 2019, Williams is simply too talented a runner to give up on. The 24-year-old hits the hole with urgency and can sort out congestion on the second level and shimmy through tight spaces. And while his 40 time (4.57) isn’t particularly impressive, he plays a lot faster. Very few defenders will chase him down in the open field. He also has the skill-set to contribute as a kick returner (I still have no idea why he wasn’t given a chance last season). If Williams can keep improving as a blocker and a receiver, there’s absolutely no reason why he can’t hold off seventh-round pick Kylin Hill and Patrick Taylor in the battle to back up Aaron Jones and A.J. Dillon.

A few other under-the-radar players to keep an eye on this summer include wide receiver Juwann Winfree, who impressed on the practice squad late last year; defensive lineman Jack Heflin, a tough SOB who gives max effort on every snap; and quarterback Kurt Benkert, who could force his way onto the 53-man roster with a strong preseason.

2 thoughts on “Under-The-Radar Players To Watch”