Funchess Could Be Odd Man Out 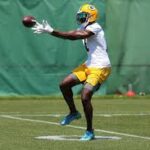 Things have sure changed at wide receiver since the summer of 2019. Back then, the battle for the No. 5 job was between street free agent Jake Kumerow, return specialist Trevor Davis, and disappointing draft pick J’Mon Moore. Flash forward two years, and there’s a decent chance Devin Funchess, a player with 164 catches and 21 touchdowns in his career, won’t make the final roster. That’s because – barring an injury – veterans Davante Adams, Marquez Valdes-Scantling, Allen Lazard, Randall Cobb, and rookie Amari Rodgers are all but guaranteed spots on the 53, and while the Packers could keep a sixth player at the position, it’s highly unlikely that player would be a 27-year-old with limited value on special teams.

Funchess was facing an uphill battle even before quarterback Aaron Rodgers forced GM Brian Gutekunst to trade for Cobb last week. Now that battle is more daunting – even if Funchess outplays all the wide receivers on the roster not named Adams. Here’s why. Valdes-Scantling’s speed is simply irreplaceable. He’s the only receiver capable of running past almost any cornerback, and the ability to stretch the field is incredibly important in this offense. Lazard is the best blocking receiver on the team, and he’ll be relied upon to get defenders to the ground in the run game. Amari Rodgers was a third-round draft pick, plus he’s likely to be the No. 1 punt returner. And Cobb will be around after final cuts because, well, because he’s buddies with the superstar quarterback/quasi-GM.

If the Packers decide to keep a sixth wide receiver on the 53, it’s likely Gutekunst would prefer it to be a player younger, cheaper, and more versatile than Funchess. That could mean a veteran like Equanimeous St. Brown, Juwann Winfree, or Malik Taylor, or even an undrafted rookie like Chris Blair. And to be honest, it’s difficult to imagine Funchess wanting to stick around if it means taking a back seat to four or five other players. If he has a solid training camp, there’s a decent chance some team will be interested in trading for him before final cuts on Aug. 31.

It’s hard to predict what Funchess might be able to fetch in a trade. That would depend on how he looks after not playing in a game since Sept. 22, 2019. An injury ended that season, and he opted out a year ago. But if Funchess can shake off the rust and flash the skills that earned him a $10 million contract in free agency from the Colts, it’s conceivable that Green Bay could get back the sixth-round pick Gutekunst sent to Houston for Cobb.

None of this is to suggest the Packers have one of the best receiving corps in the National Football League. While Adams is a first-team All-Pro, there’s not a legit No. 2 behind him. But there is a trio of No. 3s – a quartet if you include Funchess – and few other teams can boast that kind of depth. Gutekunst and the coaches deserve a lot of credit. Valdes-Scantling was a fifth-round pick, and Lazard was claimed off waivers. Turning these two players – flaws and all – into legit No. 3s is a heckuva return on investment. Throw in Cobb and Amari Rodgers and you can see why this position is now closer to a strength than a weakness – something that certainly wasn’t the case two years ago.