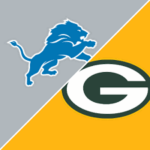 1) Aaron Jones ran hard as always, but with so many new and young players along the offensive line, there just weren’t many holes. In fact, over 70 percent of his yards came after contact. This could be the norm until David Bakhtiari returns and rookies Josh Myers and Royce Newman gain experience. In the meantime, using Jones as a receiver out of the backfield is another way to have him impact a game. The former UTEP star caught a half-dozen passes for 48 yards against the Lions, and three of his four touchdowns came via the air.

2) The coaches have a decision to make after Jon Runyan‘s strong performance in place of Lucas Patrick, who missed the game after suffering a concussion in the opener. In his first career start, the former Michigan star handled himself very well in protection and used his athleticism to make some impressive blocks in space. The guess here is that Runyan will remain a starter, moving either Patrick or struggling right guard Newman to the bench.

3) After a great first week, Elgton Jenkins had some rough moments at left tackle against the Lions. The Pro Bowl guard certainly wasn’t bad, but he’ll need to clean some things up if he’s to keep stud pass rushers Nick Bosa, Dee Ford, and Arik Armstead away from Aaron Rodgers on Sunday in San Francisco. Jenkins was a little slow reacting to late movement, and he allowed himself to get pushed into the backfield a few times. Still, it’s pretty amazing how well he’s played the past two games considering the limited number of snaps he’s taken at the position in recent years.

4) Allen Lazard played over 40 snaps on Monday night, but Rodgers didn’t throw one ball his way. That means the veteran wide receiver needed to block like the “goon” head coach Matt LaFleur often calls him. Unfortunately, Lazard didn’t live up to that moniker. Besides a bad and very obvious whiff on a pass to Davante Adams, he wasn’t physical enough in the run game. With the revamped offensive line still finding its way, Lazard really needs to play better.

1) With veteran corners Kevin King and Chandon Sullivan struggling, the coaches gave Eric Stokes a lot more snaps than a week ago, and the No. 1 pick played pretty well. The former Georgia star ended two different drives with deflections on 4th down, and while that’s certainly impressive, the caliber of the competition needs to be considered. Quintez Cephus and Trinity Benson are backups for a reason. Still, it was nice to see the rookie not panic while the ball was in the air. He didn’t always trust his technique in college and was often unnecessarily grabby.

2) Rashan Gary and Preston Smith combined for only five hurries and a sack, and most of their limited success came against backup right tackle Matt Nelson. Neither edge rusher got much done against talented rookie left tackle Penei Sewell. Watching the past two games, it’s hard to imagine either player having success against San Francisco’s two outstanding tackles next Sunday night. Gary is in his third season, but he still relies too much on brute strength. That may work against backups and average starters, but Trent Williams and Mike McGlinchey seldom give up ground on bull rushes. The former No. 1 pick from Michigan needs to add to his repertoire of moves.

3) Kenny Clark might’ve played his best game since late in the 2019 season. The highest-paid nose tackle in the league looked the part as he more than held his own at the point of attack against Frank Ragnow and gave the Pro Bowl center fits in pass protection. The former UCLA star really stepped up after a lackluster effort against the Saints. This is how Clark needs to play every week if the defense has any chance of being competitive vs. quality offenses.

4) After a summer of unrelenting hype, Kingsley Keke did next to nothing for a second week in a row. The third-year defensive end gained about 15 pounds in the offseason, but that added size hasn’t really helped against the run. He still got displaced too frequently by Sewell and left guard Jonah Jackson. Instead, that extra weight seems to have slowed Keke down a bit as a pass rusher. On Sunday night, he was unable to affect the quarterback at all. In fact, the five D-linemen who were active for the game combined for one hit on Jared Goff. That’s obviously not acceptable.

5) De’Vondre Campbell had a Blake Martinez type of game. By that, I mean his stat sheet was more impressive than his actual play. The veteran inside linebacker made a lot of tackles (13), but too many occurred 5 or 6 yards past the line of scrimmage or after a receiver caught a pass. He also gave up a touchdown to Pro Bowl tight end T.J. Hockenson, although his coverage was OK. On the plus side, Campbell showed considerable improvement from Week 1. Ditto Krys Barnes. The second-year player from UCLA was much more effective at disengaging from blocks.

1) After a somewhat disappointing first game, Corey Bojorquez was much better last night. His three punts all had adequate hang time, and more importantly, they were positioned beautifully. Kylin Hill had two impressive kick returns, although one was negated by a holding penalty. The rookie from Mississippi State is still learning how to do this job, but he’s already an improvement over last year’s trio of Tyler Ervin, Darrius Shepherd, and Malik Taylor.

FINAL THOUGHTS: No team should ever apologize for a win, even an unimpressive one. That said, the Packers still don’t look very good. The offense figures to keep getting better as the season moves along, but it’s hard to feel as confident about the defense. Watching the Lions go up and down the field for 2 1/2 quarters with no starting-caliber wide receivers was extremely discouraging. Watching Joe Barry do next to nothing to stop it was even worse. A healthy Za’Darius Smith would obviously help, but I think we’re all beginning to see why Rams’ head coach Sean McVay had no desire to make Barry his coordinator when the job opened up twice in the span of 12 months.

The Packers next face the talented, physical, and very well-coached 49ers. The team we saw beat the lowly Lions by 18 doesn’t stand a chance on Sunday night. LaFleur and his staff have a short week to figure out a way to give them one.