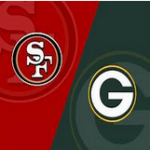 After rewatching Sunday night’s game against the 49ers, here are 10 things worth knowing:

1) It’s understandable why Aaron Rodgers is always looking to get the ball to Davante Adams, but 18 targets is a lot, especially when you consider that no other player was thrown to more than four times. In fact, tight end Robert Tonyan was targeted only once in 46 snaps. It all worked out in the end when the MVP quarterback and the All-Pro wide receiver hooked up twice on the game-winning drive, but two earlier series ended with Rodgers forcing passes to Adams. It’s worth noting that only two of the past 15 Super Bowl champions had a wide receiver with more than 148 targets. After three games, Adams is currently on pace for 193.

2) After a rough opening series, coach Matt LaFleur gave third-string left tackle Yosh Nijman some type of help on the majority of pass plays, and the end result was Pro Bowl edge rusher Nick Bosa not dominating the game. Help or not, Nijman deserves a lot of credit. He fought really hard, and when he did have to go it alone, he usually managed to slow Bosa down just enough to allow Rodgers to get the ball away. Forget whatever grade Nijman gets from Pro Football Focus; he deserves an A+ for not being a liability in his first start in an extremely difficult environment.

3) Back in August, I predicted Josh Myers would be voted to the Pro Bowl by his third season. Well, I might’ve underestimated the rookie center. The former Ohio State star put together another solid performance against the 49ers, and this one was the most impressive because of the competition. While Myers had a few shaky plays, he used his size and strength to effectively double-team defensive tackle Javon Kinlaw on a number of successful runs, and he allowed minimal penetration in pass protection. It would be ridiculous to say he’s playing as well as Corey Linsley, but so far, the drop-off hasn’t been very noticeable. That’s a lot more than anyone had the right to expect.

4) Marquez Valdes-Scantling has only six catches in the first three games, but there’s no question he’s a better receiver this season than he was a year ago. His routes are crisper, and he’s become more of a hands catcher. Both of those things were displayed on his pretty 12-yard touchdown in the fourth quarter. As noted earlier, it’s hard to blame Rodgers for targeting Adams so often, but if Valdes-Scantling keeps improving, he’ll give the offense a much-needed second threat on the outside. The former South Florida star also made some nice blocks in the run game.

5) The Packers really like Royce Newman, but Jon Runyan has clearly outplayed the rookie the past two weeks. If this continues, the coaches will have a decision to make when David Bakhtiari returns and Elgton Jenkins moves back to left guard. Runyan understands angles and leverage, and that allows him to get good positioning and wall off defenders. Newman has more natural talent, but right now he too often allows defenders into his frame and gives ground in pass protection. The former Mississippi star allowed his second sack in three games on Sunday night.

1) The hero on defense was De’Vondre Campbell, who played inside linebacker the way it’s meant to be played. He was physical at the point of attack, quick from sideline to sideline, and solid in coverage. The former Falcon and Cardinal has gotten a little better each week, and what was most impressive Sunday night was the way he stepped up after Krys Barnes left the game with an injury. Nobody is putting Campbell in the Pro Bowl in late September, but it’s pretty obvious he’s going to be an upgrade from the likes of Christian Kirksey and Antonio Morrison.

2) Defensive lineman Tyler Lancaster played his best game of the young season against the 49ers. He stood his ground at the point of attack and even recorded two hurries. The third-year pro from Northwestern benefitted from coordinator Joe Barry’s aggressive game plan. With more players moving around than in previous weeks, it was a lot easier for Lancaster to find space to get up the field. And when he got moving forward, his size and great upper-body strength allowed him to get the better of San Francisco’s interior offensive linemen on a number of occasions.

3) Despite being penalized twice, Eric Stokes’ first start was very encouraging. Unlike Kevin King, he didn’t allow any long completions or make any egregious mental mistakes, and even on the two balls caught against him, the coverage was pretty good. The former Georgia star also brought energy to a defense that sleepwalked through the first two games. What Stokes needs to do going forward is to trust his skill set and stop being so handsy. As seen last night, the officials appear anxious to unleash their flags on every ball thrown more than 20 yards down the field.

4) It was a good night for the outside linebackers. Reuniting with Barry, and more importantly, getting in better shape, has really helped Preston Smith. Once again, the former Mississippi State star looked a lot more like the solid player he was in Washington for four seasons than the lethargic and largely ineffective player he was for Green Bay in 2020. Smith battled right tackle Mike McGlinchey to at least a draw, and that was a big win for the Packers. Rashan Gary also played well, and even backup Jonathan Garvin contributed two pressures in limited snaps.

1) Aside from giving up a long return late in the first half – and that’s a big aside – special teams were an overall positive on this night. Mason Crosby drove three of his six kickoffs deep into the end zone, and of course, he hit the 51-yard walk-off field goal. Corey Bojorquez continued to place his punts beautifully – something JK Scott struggled to do the past three seasons. The coaching staff has to be a little worried about Amari Rodgers. The rookie third-round pick from Clemson bobbled one punt and did too much dancing on another. He needs to be better.

FINAL THOUGHTS: LaFleur has won a lot of games (30) in his two-plus years as head coach of the Packers, but Sunday night was definitely his most impressive victory. He had his players ready to fight for 60 minutes, and he did a better job than Kyle Shanahan when it came to getting his team to overcome numerous injuries. Green Bay was banged up on the O-line and in the secondary, but the level of performance remained about the same. On the other hand, the 49ers really missed their injured runners and corners. So while Sunday night in San Francisco was only one win in a very long NFL season, considering the brutal remaining schedule, it was a really big one for the Packers.