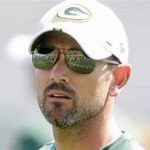 In the history of the National Football League, only a pair of first-time head coaches have won 30 of their first 37 games. One was George Seifert, who took over the 1989 San Francisco 49ers the year after Bill Walsh led the team to a championship. The other is Matthew Patrick LaFleur, who took over the 2019 Green Bay Packers the year after Mike McCarthy and Joe Philbin led the team to third place in the NFC North. Despite having such an incredibly impressive fact on his resume, LaFleur still isn’t held in nearly the same esteem as fellow young coaches Sean McVay and Kyle Shanhan – at least not by fans and most of the national media. Why? That’s simple. Because Aaron Rodgers is his quarterback. Is it fair? No, it’s not.

While there’s absolutely no question having Rodgers under center gives LaFleur an advantage most young coaches don’t enjoy at the start of their careers, what he’s done through 37 games isn’t just the byproduct of having a future first-ballot Hall of Famer at quarterback. After all, Walsh had Joe Montana and Steve Young in San Francisco; Sean Payton had Drew Brees in New Orleans; Tony Dungy had Peyton Manning in Indianapolis; Mike Holmgren had Brett Favre in Green Bay; Mike Shanahan had John Elway in Denver; Don Shula had Dan Marino in Miami; Bill Belichick had Tom Brady in New England; and Andy Reid has Patrick Mahomes in Kansas City.

I’m certainly not suggesting LaFleur is destined to be a Hall of Fame coach just because he’s won 30 of his first 37 games, but I am saying that what he’s done has been pretty darn special, and he deserves a lot more respect than he’s getting. The modest 41-year-old hasn’t been historically successful in his first two-plus seasons just because Rodgers happens to be his quarterback. As mentioned earlier, Walsh and Payton never won 30 of 37 games at any point in their illustrious careers with their legendary quarterbacks, and Reid hasn’t done it yet with his legend in the making.

Of course, having Rodgers helps a lot, but that shouldn’t totally overshadow all the positive things LaFleur has accomplished since being hired a mere 33 months ago. Aside from the obvious of winning just about every time he puts on a headset, he’s added creativity to an offense that had gotten stale under McCarthy, brought much-needed energy to the practice field, and, oh yeah, got No. 12 to look like No. 12 again after down seasons in 2017 and 2018.

By the way, the reason I decided to write this story today is because I expect LaFleur’s sparkling record to lose a little of its shine in the next few months. With games remaining against some of the league’s best teams (Arizona, Kansas City, Los Angeles Rams, Baltimore, and Cleveland), it’s going to be hard to keep that remarkable winning percentage of 81% from going down a bit. And if Rodgers leaves as expected after this season, who knows what the future holds for LaFleur and the Packers? But for right now, he deserves all the credit in the world. What he’s done in his first 37 games as coach is nothing short of miraculous – even if far too few people want to give him his due.